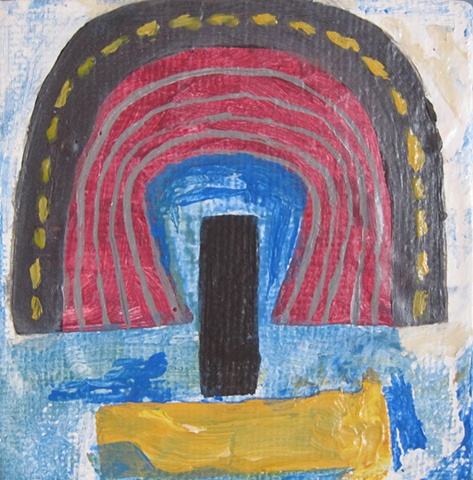 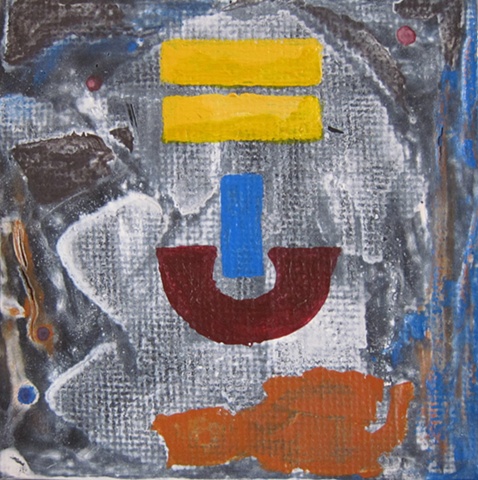 Equal To Me
Acrylic on canvas
3"x3" 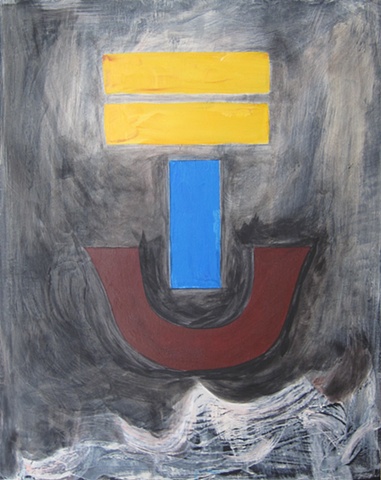 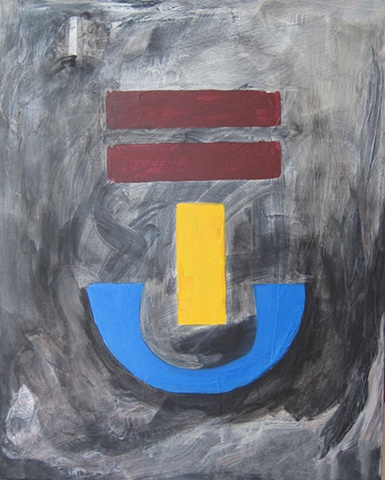 Anchored to You
Acrylic on canvas
30 x 24 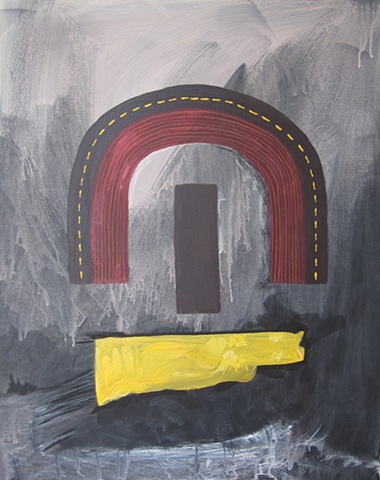 JM: Why did you call this group PERSON CIRCUS?

VG: The circus is often on my mind. My adult interest in the circus was ignited by films like La Strada and Sawdust and Tinsel. I saw IRIS from Cirque du Soleil at the Kodak theatre this summer. It's a circus-history of film, it's been an inspiration as well. The phrase person circus came from a poem I wrote several years ago. I decided it was a good name for this show because the symbology of the paintings elicit the circus.

JM: How would you describe the painting of that name?

VG: A series of women's faces somersaulting up the canvas. They share eyes and mouths, and read as multiple persons or multiple personalities of one person.

JM: And the other titles? You seem to have very approachable titles for art that is abstract.

VG: I'm drawn to represent with abstraction. I often think of my work as abstract symbolism, and use my titles to narrate that. Puns and clichés are approachable because they carry meaning the audience has likely been introduced to. A friend suggested that one canvas reminded her of snakeskin, so I titled the painting SNAKE CHARMER. On another canvas, I painted conjoined twins, and doubled the metaphor with the title GEMINIS. Two of the paintings read as ships and anchors, which for me reference the tattooed lady.

JM: The same objects in different proportions seem to recur in your imagery. How do you feel about repetition in painting?

VG: It's interesting you ask that because I've been thinking a lot about gesture and trope in this series. The trope that runs throughout the paintings is the narrow rectangle, which is a stand-in for the individual. It is repeated in the shape of the canvases, the light reflected in the women's eyes, and in the dashed yellow road markers in BORN THIS WAY.

JM: After the Lady Gaga song?

VG: Yes, I'm a fan of Lady Gaga and in particular her lyrics, which advocate for equality and self acceptance, based on the fact that we are all born.

JM: Could you discuss your use of color? You seem, like the abstract expressionists, to love color fields.

VG: I approach space w/ color. After visiting the Goulandris Museum of Cycladic Art in Athens, inspired by the broad lines of the minimalist figures carved from stone, I envisioned the symbol of the narrow rectangle floating between an arch and equal sign. I wrote down the colors cerulean, brick red, and cream, seeing the color of the shapes. Cream became yellow in the process of painting. The narrow crossed arms of the Cycladic figures reminded me of the Venus of Willendorf. My symbol is a distilled representation of woman w/ child, as well as an anchor and ship, hence their titles ANCHORED TO YOU and PREGNANT SEA.

JM: How do the women's faces figure in?

VG: One night, when I was testing color combinations, I drew a ring of miniature women's faces in the center of the composition. That impulse no doubt came from a miniature sculpture whose details remain w/ me; I am infatuated with the sheer beauty of this ancient Greek sculpture of a female head a few millimeters in height. That infatuation developed into the women's features depicted on the long narrow canvases. Ideologically, they further the exploration of representations of the individual.

JM: Do they have any basis in the tradition of the self-portrait?

VG: Technically, no, but, in as much as they are an attempt to develop my conscious life by accessing and representing my unconscious for the pleasure of an audience, yes. They reveal me to myself. Their concerns are my concerns, as a person in the world. Having recently had a hysterectomy, that we are born is on my mind. I feel like a person circus. When I initially wrote the phrase I was thinking about Freud and Lacan, the multiple selves that their theories propose. We are each our own Person Circus.