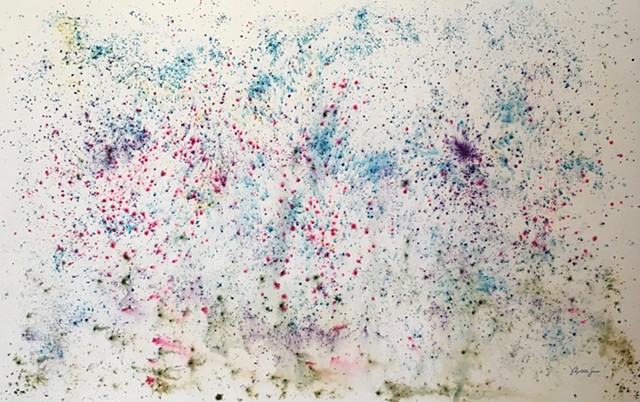 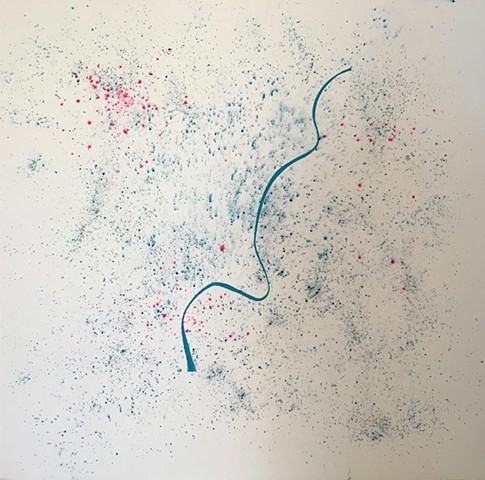 Ribbon in the Sky
Mixed Media on Canvas
40"x40" 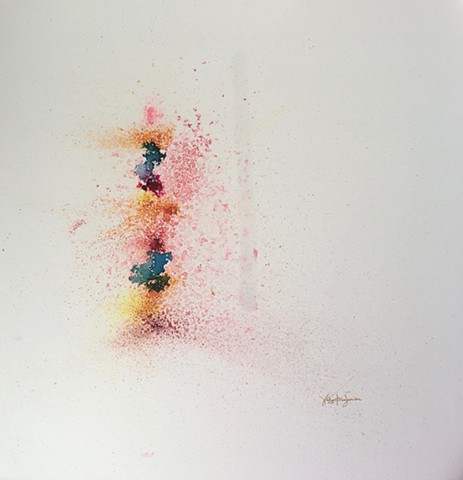 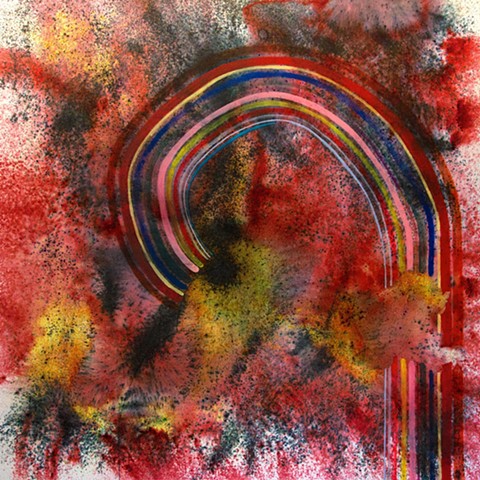 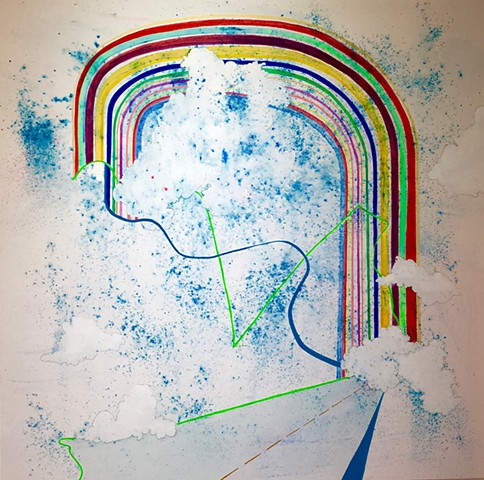 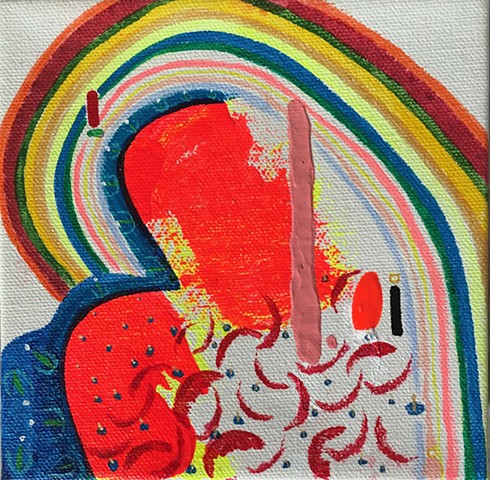 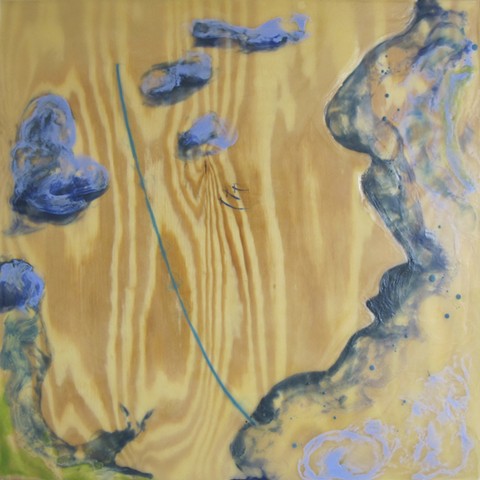 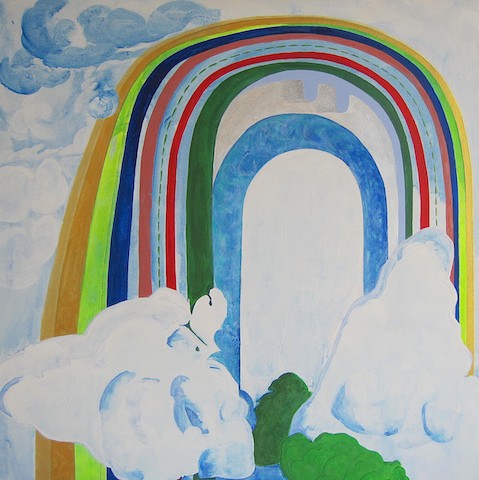 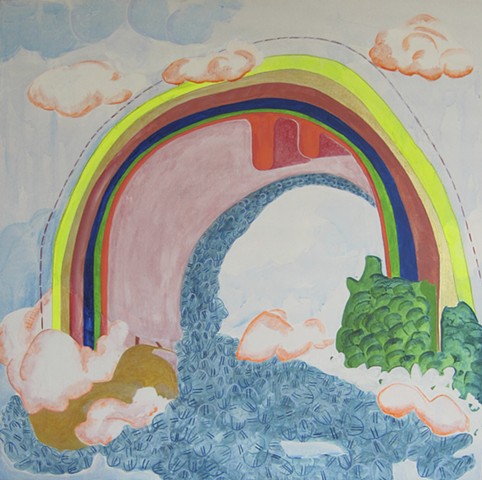 ROAD TO NOPLACE
acrylic and graphite on canvas
36” x 36” 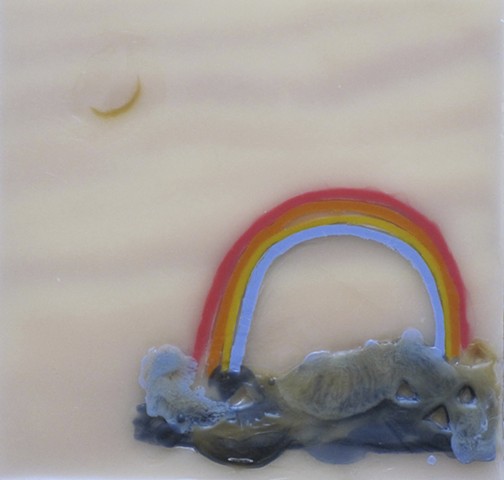 HAVE YOU EVER BEEN TO HEAVEN? 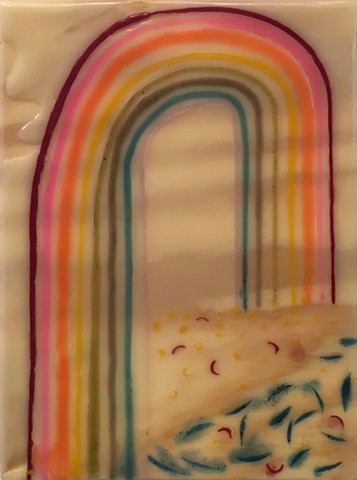 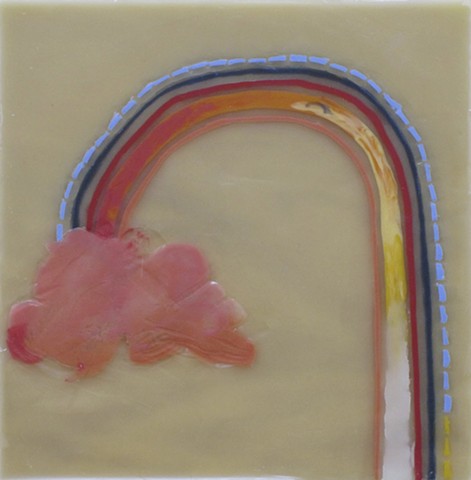 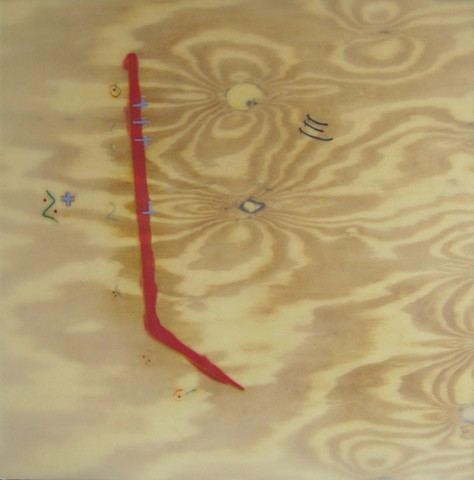 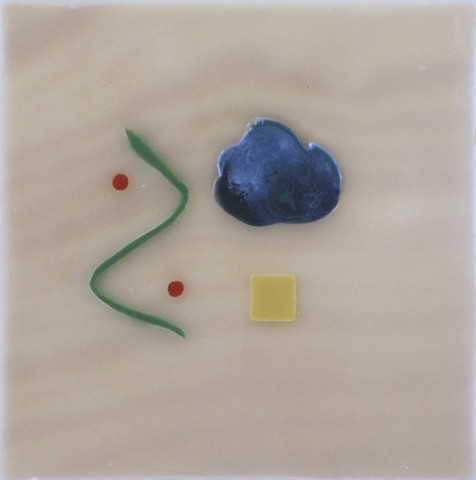 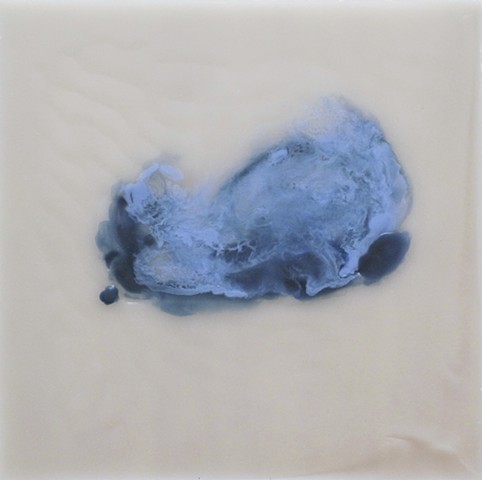 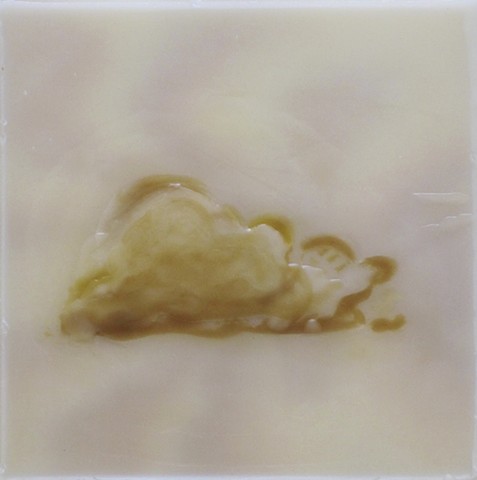 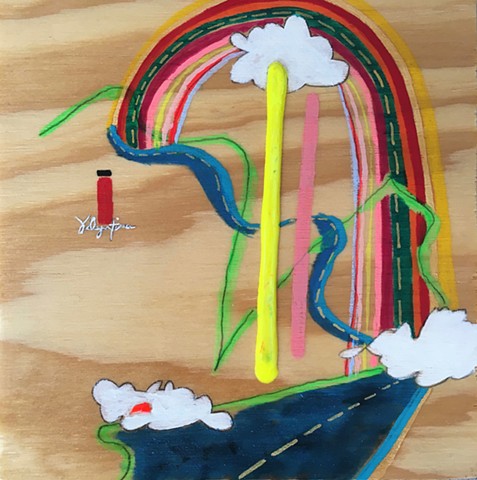 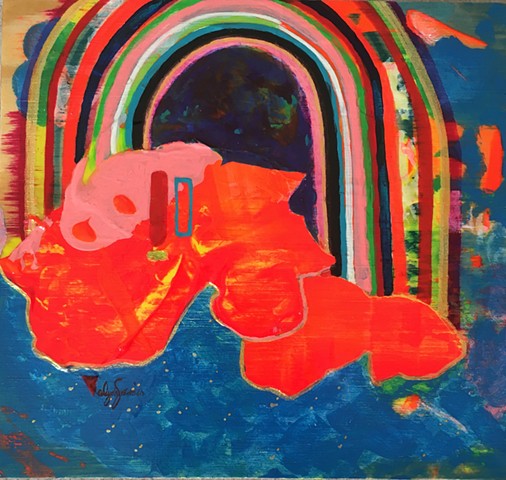 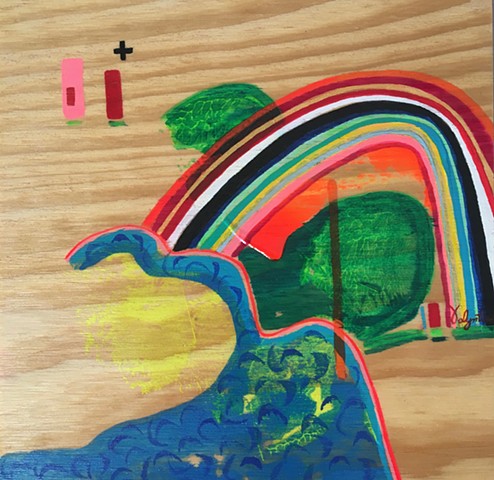 GHOST OF A DOG
Mixed Media on Pine
8"x8" 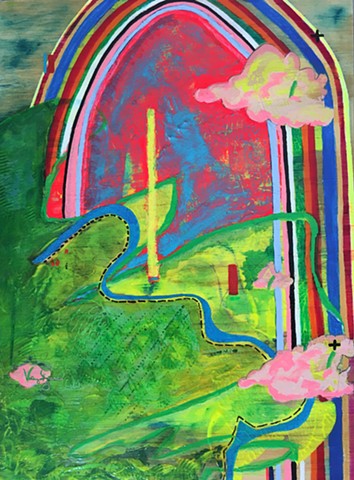 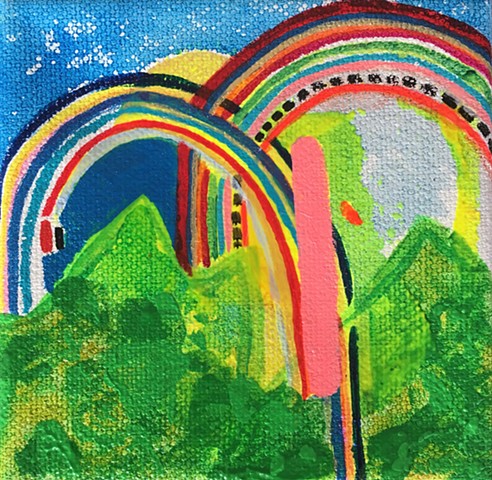 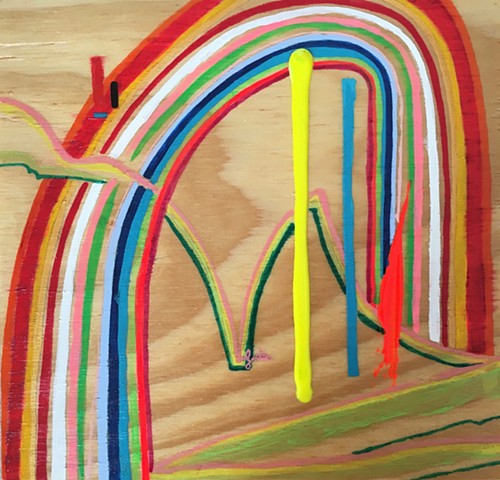 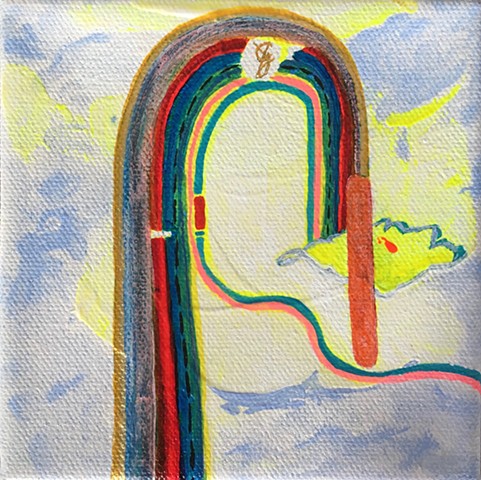 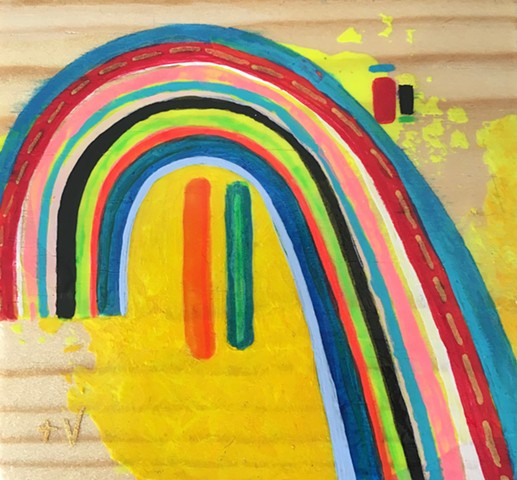 Antony and the Johnsons’ exquisitely painful song, Another World, conveys a desperate love for what’s here, confounded by the knowledge that it and we are ephemeral. The guiding principle for CLOUDSHOW / UTOPIA is to make ANOTHER WORLD and discover PEACE ON OTHER PLANETS. Because we hurt nature, each other, and ourselves, I set out to create my utopia as a place unpeopled, a place of clouds, rainbows, and waterfalls without us there to screw everything up.

No sooner had I begun serious thought about utopia, than I began to kick people out of it. I’d been thinking a lot about John William Waterhouse’s painting Ividia ; in Latin, invidia is the sense of envy, from invidere, to look against, to look at in a hostile manner. Envy for or from others drives us to solitude. I recalled the noir film LE SAMOURÏ and reacquainted myself w/ its opening text, “There is no greater solitude than that of the samurai unless it is that of the tiger in the jungle... Perhaps...” — Bushido

There are TRACES OF FORCES that guide us to each other and to ourselves. My work for CLOUDSHOW / UTOPIA actually began with a previous show inspired by The Divine Comedy, in particular by Michael Mazur’s monotype illustration for Canto XI, a map of Dante’s hell, which, if rotated, reads as a rainbow. In my painting, Nine Circles Make A Rainbow and a Target, a pink arc with red road markers represents the seventh circle, in which Dante houses those who commit sins of violence.

THE ROAD TO NOWHERE begins and ends within us. Though we do harm, we do love. We are kind. And we’re here for the near and somewhat distant future at least. Challenging myself to make objects without the presence of humanity didn’t come to fruition.

Accidents happen; it is a part of my practice to embrace them. When pouring the base for CLOUDS WHISPER TO THE MARTYRS OF AN END TO ALL WARS in a 115-degree garage, the dam broke. A few pounds of 400-degree beeswax and damar began to cascade across my worktable and fall to the floor. I quickly placed supports around the edges of the frame to save as much medium as possible. I added more medium, and pulled out my hot air gun to direct and re-melt the cooling surface. Despite my efforts, it began to harden unevenly. I walked away.

I returned to discover that the profile of a woman’s face had hardened into the “misshapen” surface. I decided to carve the minimalist symbol, seen in TRACES OF FORCES, as I had initially planned, and also to define the woman’s profile. I filled in the rest of the uneven surfaces w/ clouds, sky, and foreground. It was not until the piece was completed that some friends pointed out the optical illusion of a man’s profile tracing the woman’s profile. It’s a paradox – I set out to create a world free from people and behavior, yet I can’t help but make human faces embracing.

I desire connection and celebration, too. I want to go to a CLOUD PARTY AT THE RAINBOW. I want to KEEP DANCING. Music is an integral element of my practice. I like to dance while I’m working. I chose Jay-Z’s Heaven to start my playlist – I like to choose a certain song, then hit shuffle. I must have listened to Heaven a hundred times by now. The title HAVE YOU EVER BEEN TO HEAVEN? comes from that song.

Reading, research, and other visual arts are integral to my process as well. They are my escape from actual making, but also my inspiration to get back to paintbrushes or sculpting tools. Inspiration for a series also comes from my collection of art postcards. For CLOUDSHOW / UTOPIA, I was inspired by one of King Tut’s inlaid pieces of jewelry and a drinking cup, Victor Pasmore’s The Green Earth, David Smith’s Voltri VII, Miro’s Bleu II, Calder’s circus, Howard Hodgkin’s Lovers, and Kandinsky’s Painting with Three Spots.

I had the opportunity to visit California in the midst of production. I took with me Hundertwasser’s Complete Graphic Work 1951-1976, an exquisite, pocket-sized catalogue produced by Joram Harel in Vienna, 2008. At the LACMA, we saw Matisse’s large-scale ceramic La Gerbe, Chris Burden's Metropolis II, and \http://www.lacma.org/art/exhibition/hans-richter-encounters|Hans Richter: Encounters|. Richter was involved w/ the utopian groups Die Brücke (The Bridge) and Der Blaue Reiter (The Blue Rider). I brought home a copy of Timothy Benson’s Expressionist Utopias and was surprised to rediscover that the guiding principle behind the many utopian movements is the desire to make a better community, which creates the purity of a Garden of Eden or the complexity of an architectural fantasy. For the Glashaus utopians, a CRYSTAL CATHEDRAL is the center of their architectural ideal.

My cathedral is the rainbow, a WATERHOUSE. My utopia is a community of works that CIPHER THE COSMOS for SYMBOLS THAT BELONG ON THE ALTAR OF A FUTURE SPIRITUAL ONTOLOGY .

Notes: The quote attributed to Bushido was invented by Le Samourï director Jean-Pierre Melville. Two of my titles derive from From Timothy O. Benson’s Essay, “Fantasy and Functionality: The Fate of Utopia.” 1. “artists around 1900 hoped to find in nature signatures or traces of forces that might reshape the world for the betterment of humanity.” 2. The goal of the Munich Blaue Reiter (founded by Kandinsky and Franz Marc) according to Marc was “to create out of their work symbols of their own time, SYMBOLS THAT BELONG ON THE ALTAR OF A FUTURE SPIRITUAL religion.” The title KEEP DANCING is inspired by Arcade Fire’s My Body is a Cage, in particular, the lyric “My body is a cage that KEEPs me from DANCING with the one I love”